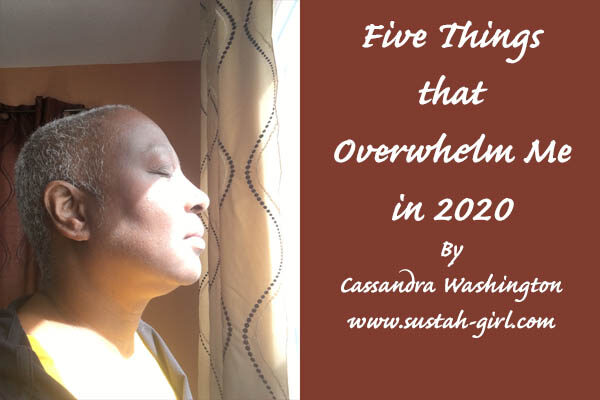 For a couple of weeks, I tried to write a blog post about traveling and road trips. However, I could not get any ideas down or write any sentences. I wondered why I had the block of my creativity. Then, I stopped to think about all that is going on in the United States. Finally, it came to me that I am overwhelmed in 2020. I feel this way because too much is going on in this country. I cannot fake it anymore because five things overwhelm me in 2020.

Who knew that 2020 was going to be a doozy. Maybe we should just skip to 2021. We all go into a new year with resolutions and high expectations. Many people make plans and set personal and professional goals. We have it all planned out and don’t expect significant interruptions in our lives. All of a sudden, stuff hits the fan, and we don’t know what hit us. That is what happened in 2020. Many of us are emotionally treading water, including me. Here are five things that overwhelm me in 2020.

On January 3, 2020, I was diagnosed with Stage 1A, Grade 3 breast cancer. The diagnosis is a life-changing experience for me. All types of thoughts enter your mind when you hear the doctor say, “You have cancer.” For a moment, your brain goes into a fog, and then you realize you must snap out of it. More overwhelming information is coming your way about the next steps, including surgery, treatment options, medical tests, medications, and more.

After getting the diagnosis, I cried and prayed. I tried not to cry in front of friends or family members because I didn’t want to appear weak. “Be strong” is what mothers say to their daughters. Sometimes, you don’t want to be strong, and you don’t always have to be Superwoman. Take the “S” off your chest for a while and succumb to humanness.

It’s now June, and I finished 12 rounds of chemotherapy. Side effects hit me hard some days, but I survived. I lost my hair, but it will grow back. Steroids caused weight gain; however, I needed the pounds to help keep my body healthy. Emotionally, moments of sadness came over me, and I prayed for healing and sanity. Two phases of the journey are complete. Next is radiation and the continuation of antibody infusions. Yes, the experience is one thing that overwhelms me in 2020, but I see the light at the end of the tunnel.

Along came a pandemic in 2020. It is a highly contagious virus that affected every nation. COVID19 hit the United States hard, and every day the new information and statistics were breaking news. Some people believe it’s a hoax and others hunkered down per the CDC and state government rules. Most states ordered stay-at-home instructions in March. Schools and businesses closed, millions lost jobs, and thousands of people infected with the virus lost their lives. My part-time work dried up because it was dependent on working with teachers and students in public schools.

Due to my surgery in February, a compromised immune system and chemotherapy treatments, my lockdown started in February. It is now June, and my state is easing up on some restrictions. I gave up more of my independence and learned to stay at home by all means necessary. When it is essential to leave my house, I have my mask, hand-sanitizer, rubber gloves, and sanitizing wipes. Remembering not to touch my face or rub my eyes was difficult to do, but soon I didn’t have to remind myself. Furthermore, standing six feet away from anybody and everybody is no longer hard to do. It has become natural. Looking at people with the side-eye is my indication that one is standing to close to me. I gave up hugging friends and relatives and learn to smile with my eyes. It is an entirely new set of protocols for those who want to stay healthy and not become a statistic.

The COVID19 pandemic taught me that I am still an introvert, but I need human interactions. Yes, my friends and I can have electronic meetings using Zoom or Skype. Work-related meetings are through Microsoft Teams. However, after so many e-meetings, I need to see and talk to people in the flesh. Visiting my mother is still problematic because she is also immunocompromised. She’s in her 80’s and suffers from an autoimmune disease. When visiting, I have on all my gear, sit at least six feet away from her, and make sure I don’t give any hugs. We are a family of huggers. This new way of living is hard for us. The third thing that overwhelms me is the death of Ahmaud Arbery, Breonna Taylor, and George Floyd. Social media and videos bring news and happenings to your doorstep vividly and in real-time. We watch Ahmaud Arbery being chased down by men who decided to take the law into their own hands. The White men decided they were making a citizens’ arrest of a young Black man without proof of any crime. Next, they hunted him down using their trucks and weapons as he jogged through their community. Finally, we see Ahmaud Arbery fighting for his life as he’s shot and killed.

Next, we learn about Breonna Taylor, a young Black woman who was shot by the police in her apartment. Police said they had a no-knock warrant and announced themselves as they began to tear down the door. Breonna and her boyfriend thought someone was breaking into the apartment. Not knowing who is breaking through the door, the boyfriend grabs his firearm and begins to shoot. He shoots one officer in the leg, and the officers open fire. Breonna has eight bullets in her body. They arrested the, and Breonna dies. Police insist they announced themselves, but neighbors deny the officers’ claims.

Later, the police admitted the warrant was for a man who did not live at Breonna’s address. They also revealed that the man was already in jail. What a major mess up. A young woman died for nothing! I cannot imagine the pain of Breonna’s and Ahmaud’s parents. I know how I feel to read and see these stories on the news. It is overwhelming!

The overwhelmed feelings did not stop with Breonna and Ahmaud. Next was the eight-minute and forty-six-second video of George Floyd’s life taken by a Minneapolis police officer. For almost nine minutes, the officer had his knee on George’s neck, slowly asphyxiating him. The video showed George saying, “I can’t breathe” and eventually calling out “Mama” in the last couple of minutes of his life. Anyone watching the video knew when he cried out for his mother, that he was near death. They say that we see our dead loved ones when we’re in the last moments of our lives. We can say the same for George Floyd. His death was the straw that broke the camel’s back. The killing of George Floyd was a catalyst for demonstrations, rioting, and looting in cities across the United States and the world. Black people had seen and heard enough about unarmed men and women killed by law enforcement officers. Also, people are tired of no justice when overt incidents of misconduct occur, and there are no consequences. Young Black people are tired, angry, and traumatized. Not only do they see violence in their communities, but through social media and videos, they see some officers and armed citizens getting away with murder. It is their reality, and others should not negate it.

I understand the anger and trauma, yet the destruction of stores, pharmacies, and businesses overwhelmed me. Cities and communities in the United States did not prepare for the level of anger that rose in its young citizens. Many of the protesters were peaceful, but some people began to riot and loot. Once the torch began to burn, it was hard to stop what happened next. Now the question is what happens next. How do we fix this mess? Police reform, systemic racism, prison reform, and more are all on the table and out in the forefront of politics.

It is an election year in 2020. You read four out of five things that overwhelm me. The fifth thing to overwhelm me is politics. In the United States, the political divide is as wide as the Mississippi River. Twenty-four hours a piece of day news comes from all types of reliable and unreliable sources. We received constant debriefs on the federal, state, and local levels during the high point of the pandemic. Next, we heard endless stories about the killings of Ahmaud Arbery, Breonna Taylor, and George Floyd on national and local news stations. When the protests and riots hit across the country, they blasted across all media sources for 24 hours each day. It was too much to absorb mentally.

Each incident brought out the good and bad about politics. Political parties both decided that changes are needed but can’t agree on what and how to make changes. Citizens chose sides between the police and the victims. Therefore, no one can agree on much. Presidential and congressional candidates talk over and about each other. Some politicians spend more time on Twitter, spewing out tweets than governing. The citizens are fatigued with political gridlock and unkept promises. Nevertheless, we are all overwhelmed and tired of the same old politics. Some politicians and citizens don’t want or like to talk about race and racism. What does it take for politicians to get to the root cause of the events, anger, and trauma? When do they see themselves as part of the problem?

I do not have the answers to the five things that overwhelm me. All of it is very complicated and complex. Instead of continuing to feel overwhelmed, I think and write down things I can do to help. Yes, we’re still on lockdown due to the Covid19 pandemic, but we have to start somewhere.

What I can offer is empathy and wisdom to a younger generation. I can help to register people to vote and take them to the polls. As an educator, I will continue to teach students valuable lessons about the history of our country and how it affects our lives today. Consequently, ideas continue to flow from my mind about supporting my community, city, state, and nation. What overwhelms you, and what can you do to make change happen?